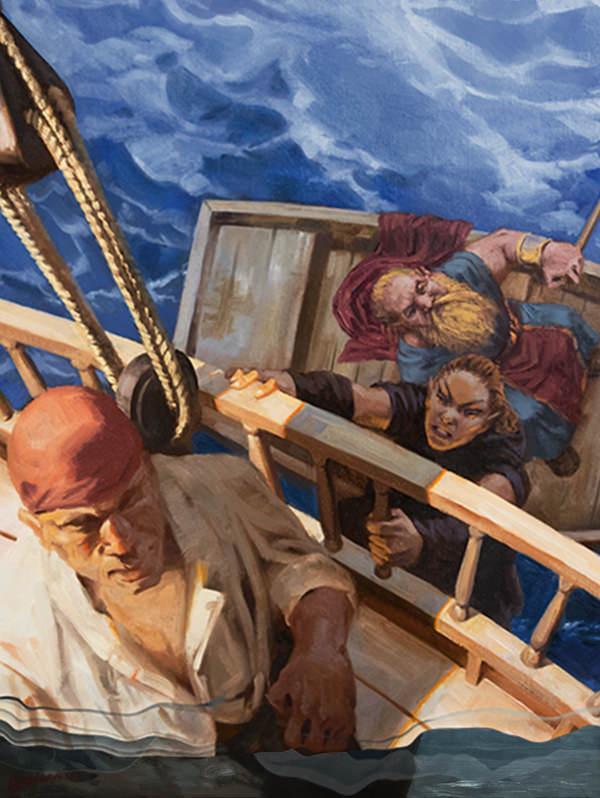 Our adventurers are hired by the town council of Saltmarsh to locate the smuggling ship called the Sea Ghost and bring an end to their operation. Fortunately, they found a way to give a signal to the ship from the house that was previously cleared. This allowed them to row right up and climb aboard.

The smugglers on the deck including the captain and a wizard put up a good fight, but in the end, the party won out. They convinced the remaining crew that they wanted a new captain more than they wanted a burial at sea. There were also a few lizardfolk on board who were not part of the operation, but were working with the crew to smuggle weapons. The party and lizardfolk came to an agreement. The new captain could keep the ship and the bounty within if they would drop off the lizardfolk unharmed. The was carried out without much trouble and the party brought the ship back to Saltmarsh. The council agreed that they could keep the ship on top of the payment received for a job well done.

Along with the weapons being carried for the lizardfolk, a sea elf was discovered named Oceanus. He had stowed away on the Sea Ghost, attempting to unravel the mystery of the ship's purpose. Unfortunately, for him, the crew caught him and imprisoned him. Now that he has been freed, Oceanus has returned to his tribe.