For use with
D&D 5th Edition

The Wild Beyond
the Witchlight

A FEYWILD ADVENTURE FOR CHARACTERS LEVELS 1-8

The traveling extravaganza known as the Witchlight Carnival visits your world once every eight years. You have a dim memory of sneaking into the carnival as a child without paying for a ticket. That memory has grown foggy over time, though it still conjures a weird admixture of emotions—wonder and awe mixed with loss and regret. During this childhood visit, your character lost something.

As time passed, your heart became less heavy, and you gave less and less thought to those childhood events. Now, for reasons you can’t explain, the longing to retrieve that which you have lost has resurfaced, as though an old spell has faded away, allowing you to feel the loss as sharply as if it happened yesterday.

The Witchlight Carnival has returned, and you find yourself standing near a ticket booth by the entrance at twilight, just as the carnival is about to open. There you meet others who look as troubled as you. Without knowing how or why, you sense that each of them has lost something as well. Perhaps fate has brought you together. 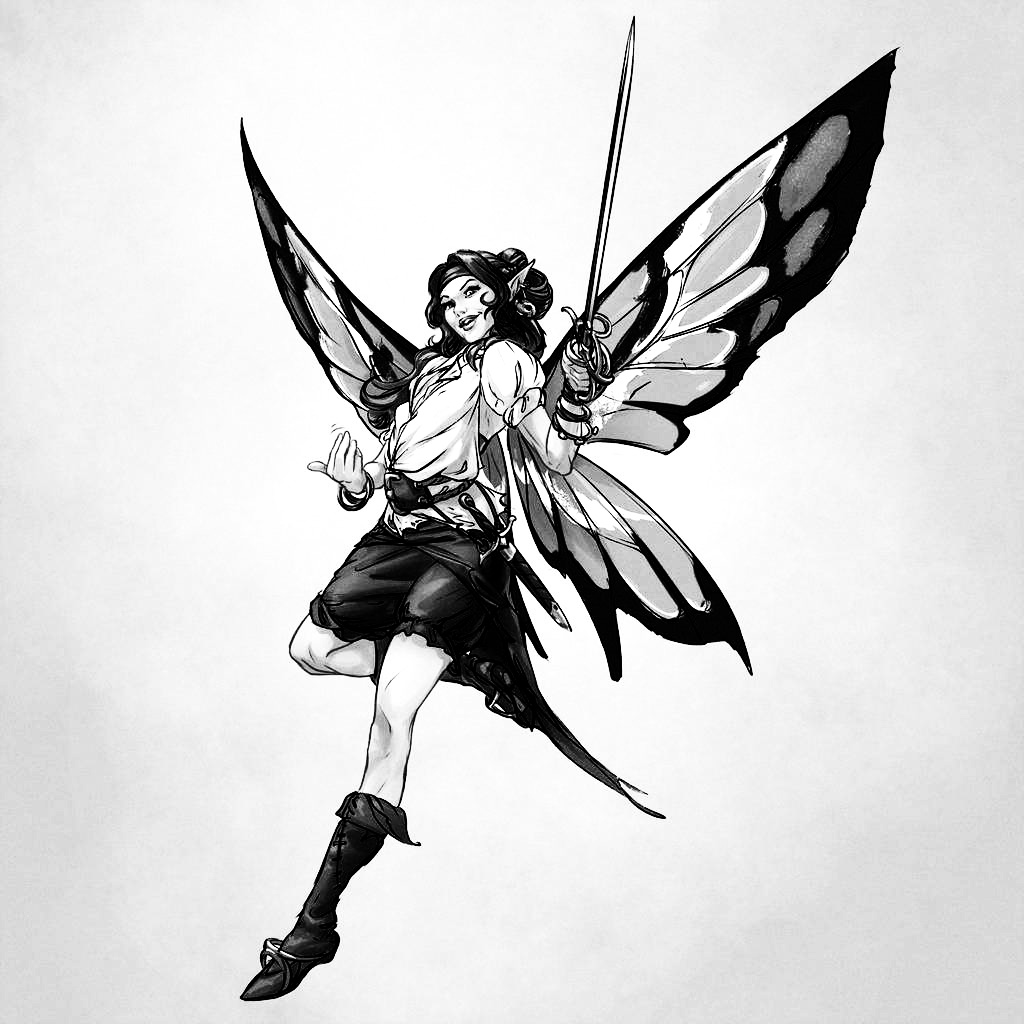 Khamma works for the carnival and is quite useful even if attendees don't know it. She wild shapes into a number of animals the carnival needs when the actual animals are sick or just unavailable. Her name is Khamma Aphid but her position is unofficially known as "The Chameleon" so folks will usually just call her by her title, or just Kham. 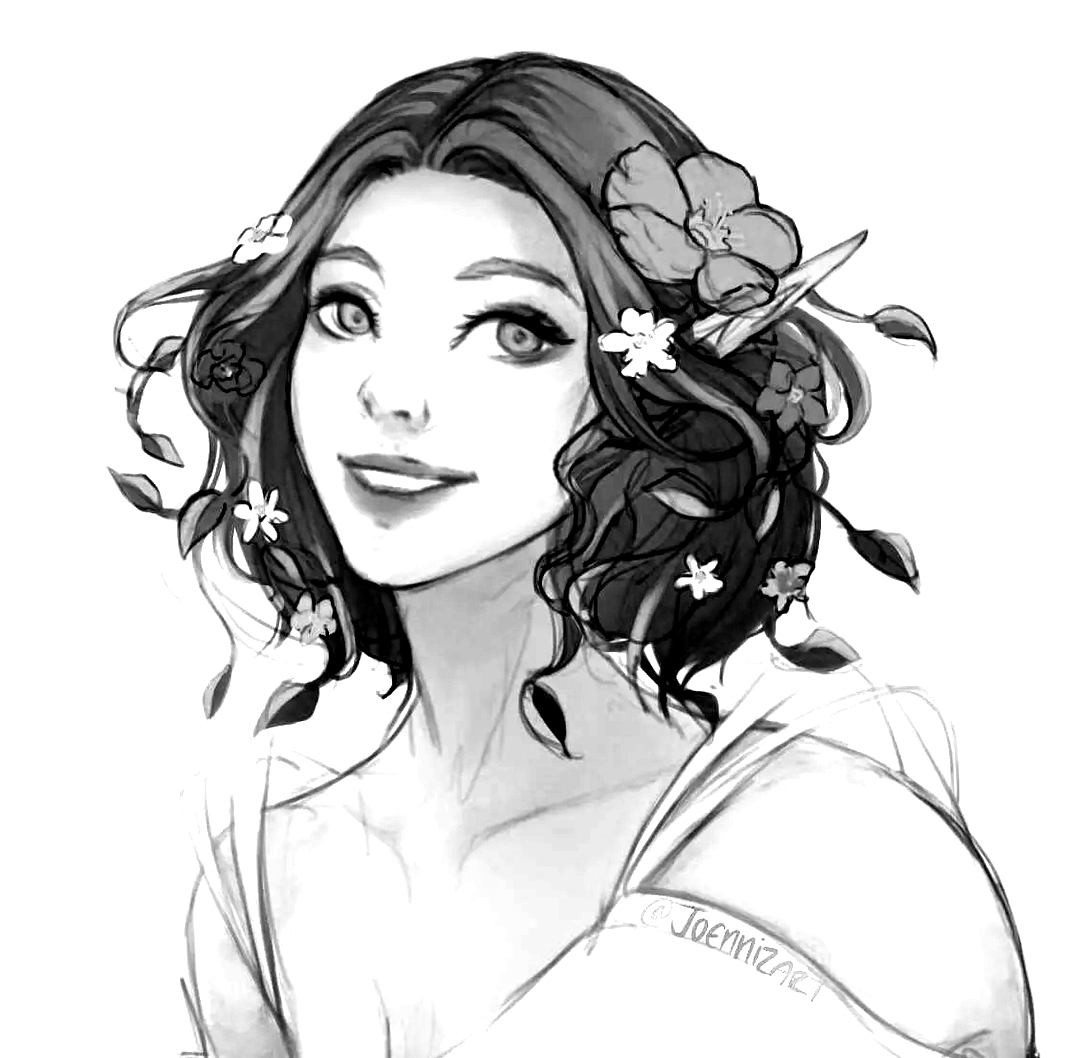 Celia joined the Witchlight Carnival ten years back after an unfortunate bargain with a "witch" there left her tied to a dao. Now she serves as a handyperson for the carnival, fixing the unending list of things that find themselves broken. She has a few friends, but her constant companion is a blink dog named Henry. 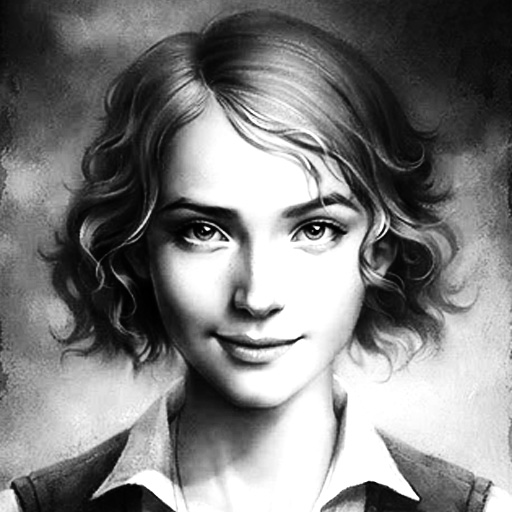 Having showed proficiency with music at a young age, Kimber trained with Yutu, a group of famous minstrels. She took to the lessons and excelled, but stopped after realizing the training was draining her family's finances. Kimber settled for a life on the farm, helping her family and making some money on the side to keep them afloat. 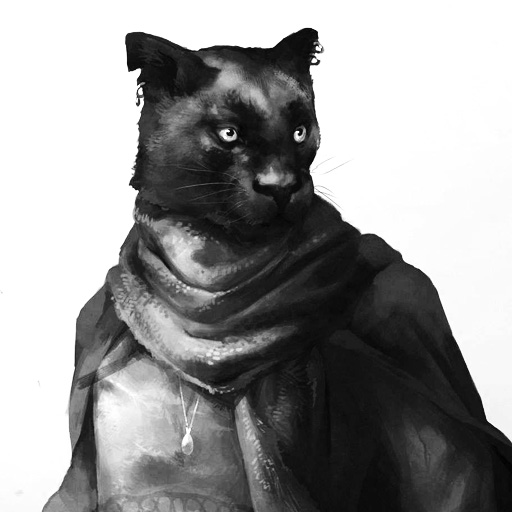 Rainon is a traveller who has a knack for getting into places. One of those "explorations" led to an unplanned trip to the feywild, where he spent 15 years of which are now lost to foggy memories of that time. Haven woken back on his home plane, a little grayer and a little wiser, he sought out the Witchlight Carnival, knowing of its close ties to the feywild. Maybe there are some answers there? 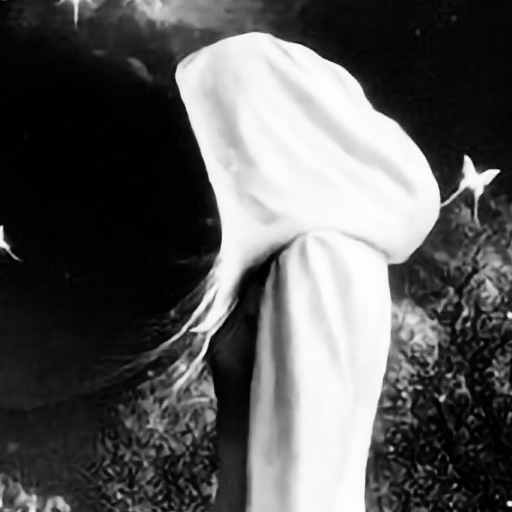 Willow is a bit of a mystery, keeping themselves shrouded behind a cloak, obscuring their features. Likewise, they keep personal details hidden. Whether it is out of a deep sense of privacy or not to burden anyone with dark secrets is left up to those who meet Willow to decide.

Mister Light runs the Witchlight Carnival along with his parter, Mister Witch. Mister Light serves as master of ceremonies for the main event under the bigtop and is responsible for the performers and artists. Mister Light has a scepter festooned with a decorative butterfly everywhere he goes.

Leader of the Brigands

Agdon leads a band of hareagon brigands based in the Brigands' Tollway. He's been menacing Prismeer for a long time and has become particularly troublesome since Bavlorna took control of Hither. He is known for his absurdly long blue scarf.

Burly works directly with Mr. Witch and Mr. Light, carrying their messages to other Hands or fetching those the Carnival Owners wish to speak with. He's friendly to everyone except Thaco the clown.

Candlefoot is the reluctant ticket-puncher at the Hall of Illusions, and he does all he can to avoid entering the hall. All the color has leached out of his skin, hair, eyes, and apparel, giving him a strangely monochromatic look. His voice was recently returned to him, having been stolen by a kenku. Now he is engaged to Palasha the mermaid.

Not a Real Centaur - Operates Carousel

When asked, Diana is quick to point out that she is not a real centaur. instead, she's a person that made a bad deal. You're not sure exactly what that deal was. She runs the carousel of enchanted carved unicorns that provided some useful information.

Dirlagraun looks after stray children until they can be reunited with their parents. The keg fastened to its collar is filled with toffee apple juice and fitted with a spigot for easy pouring. The juice never fails to console an upset child.

Ellywick is the friendly bard first met at the Feasting Orchard. She spoke in odd missives and seemed to know a lot about your group. She also arranged tickets for everyone and managed to get time off for Khamma and Celia. Ellywick suggested this is all for some greater purpose, but didn't want to say too much.

Feathereen is a giant swan that pulls a gondola along the river. She is keen to engage in deep conversations about various philosophical topics. The more esoteric the better. She became keen of Willow, discussing the nature of evil and other stimulating opinions.

Jebbeck talked a good talk until she came face-to-face with Rainon and Kimber. They managed to convince the Harengon to give up the magical stoppered gourd she carried in exchange for a favor to the brigand leader Agdon Longscarf

Jingle Jangle lives in Telemy Hill and is friends with the awakened trees there (and the hill itself). She has a vast collection of keys and is a new owner of Sir Talavar's former cage.

Kettlesteam had stolen Candlefoot's voice in order to cause havoc amongst the carnival. She was seeking attention from Mr. Which and Mr. Light and figured the chaos would make them take notice of her and they'd hear out her request for information regarding the archfey Zibilyna.

Northwind is a young treant from the fey realm of Prismeer that manages the dragonfly rides along with his companion, Red, and awakened squirrel. You met him at the start of the night when he and Red were handing out treats. The treant is known for being terrible at keeping secrets.

Palasha is the mermaid whose singing serves as the main attraction at Silversong lake. She was recently reunited with Candlefoot after his voice was returned to him. The two are now betrothed.

Sir Talavar is dedicated to the Summer Queen and has come to Prismeer to find out what was going on with Zybilna. When he tried to return to his home plane, the hags trapped him and Bavlorna Brightclaw locked him in an enchanted birdcage.

This creature keeps showing up. First, she was seen in the mirror, trying to coax the halfling Rubin to follow her. Then that brought up a vague memory that is tied to Willow's sense of loss. Dirlagruan says his cub, Star was seen with Sowpig (a name given to her by those that have seen her) before disappearing.

Thaco has been the longest serving Witchlight Hand with a mysterious past. He has retired from performing and works for the carnival owners. He rarely talks and is reluctant to help.

Proprietor of the Inn at the End of the Road

Tsu is a pleasant woman who despises the Hourglass Coven. She is convinced that the party is on a quest to restore Zybilna to power.

Dwarf - Runs the Mystery Mine

Zephixo dresses as a wizard and plays the part so well that his fellow Witchlight Hands are quite certain whether he has actual magical talent or not. He always seems to be "in-character" and no one questions it anymore.

Kimber and Rainon learned this name from the unicorns they helped name on the carousel. Bavlorna, whose lair in a cottage on stilts in a fey swamp, is the keeper of that which Kimber lost and is somehow tied to Rainon as well. They also learned that she is allergic to seeing someone run widdershins. Also called Slack-jawed Lorna by Hither locals.

Celia and Khamma learned that Endelyn Moongrave has what they lost, a sense of direction and artistic creativity respectively. The unicorn at the carousel told them that Endelyn lives in a mountaintop theater and that she has also foreseen her death, which will happen during an eclipse.

Willow was told that her lost thing, handwriting, is being kept by Skabatha Nightshade. Willow was also informed that Skabatha resides in a hollowed-out tree in a sylvan forest, she sleeps in a dollhouse and can't remember the first creatures she sees when she wakes up.

You have learned of Zybilna from Kettlesteam. The archfey is the kenku's patron. She rules the feywild domain of Prismeer, which the carnival has ties to. It is Kettlesteam's belief that something has happened to Zybilna and that Mr. Witch and Mr. Light know something about it, but can't or won't say what it is. 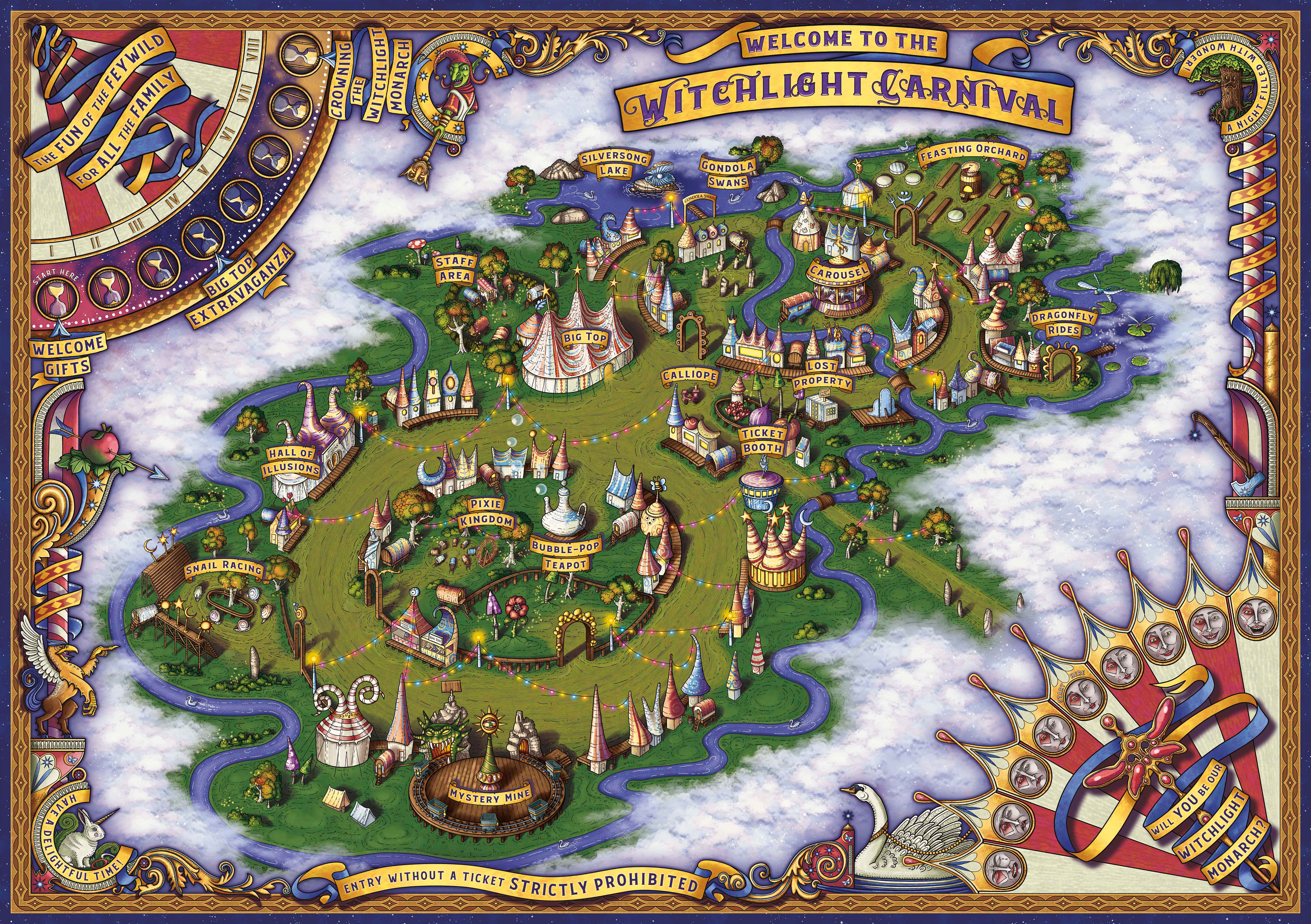 The booth where visitors buy their tickets is located at the main entrance.

Where the two main events are held, the Big Top Extravaganza and the Crowning of the Witchlight Monarch.

Ride the giant bubbles over the carnival.

Where the ever-present music comes from.

There are no horses here, only unicorns and secrets.

The description is in the name. They are big, so you don't need to shrink.

The best food court this side of the Feywild.

Ride a boat pulled by a philosophizing swan.

Mysteries are abundant at the Hall of Illusions.

Something missing? Maybe it turned up here.

Face your fears on this breakneck cart ride.

The best attraction the carnival has to offer according to the pixie that runs it.

See the mermaid, Palasha, and hear her song.

Myriad options for every taste. 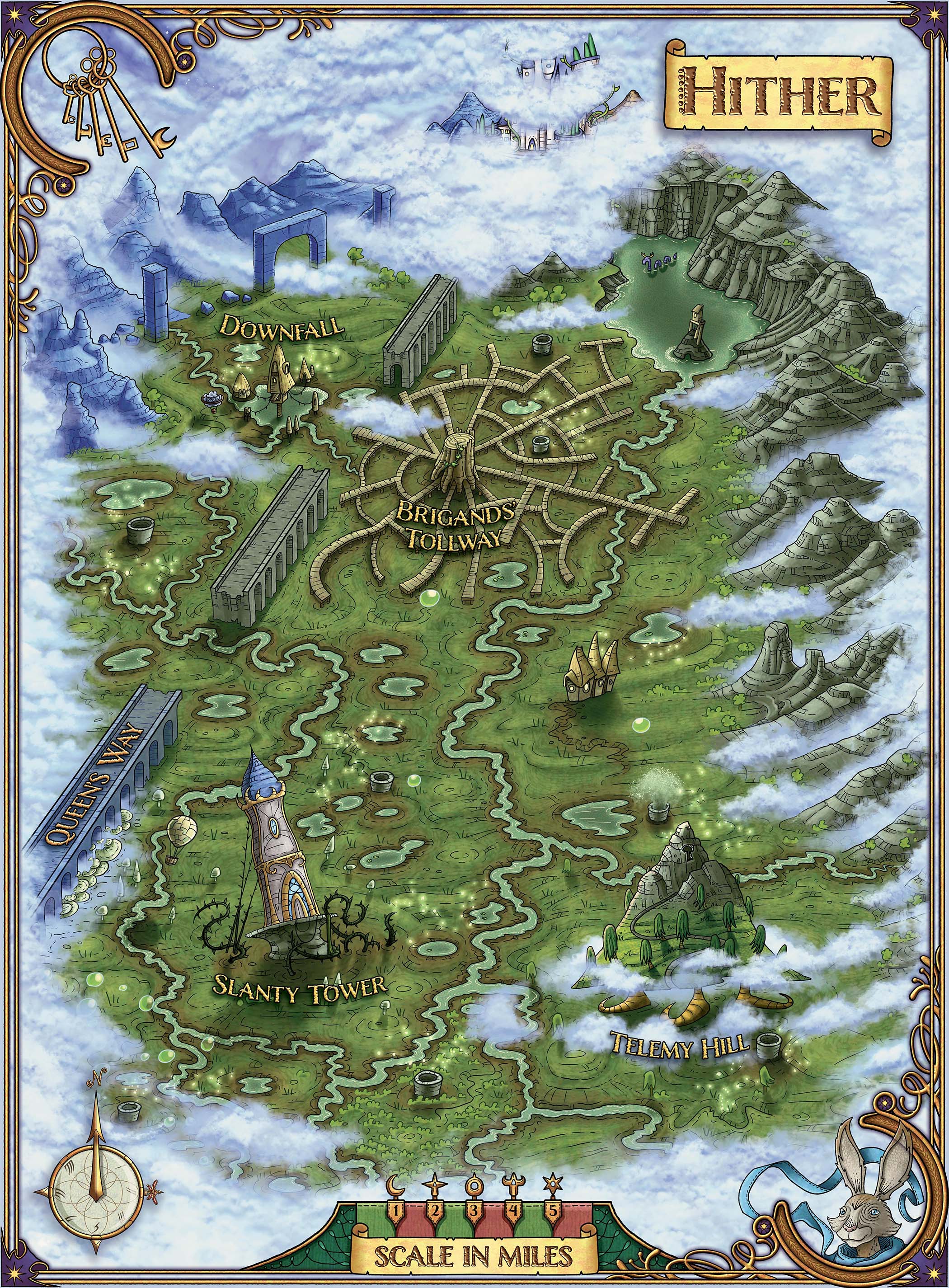 Despite recent events, this causeway was not named after Kimber. It towers 100-feet above the marsh and is broken in many places.

Surrounded by brambles, this tower slants at a precarious angle. Hanging from the crenellations is a large woven basket at the end of a tangle of ropes, the result of a recently crashed balloon.

Inn at the End of the Road

Run by Tsu Harabax, this inn on legs meanders about Hither. According to Tsu, it used to be "talk of Prismeer" when Zybilna was in charge.

Sir Talavar says this is a living hill and home to Jingle Jangle, the key-obsessed goblin.

The base where Agdon Longscarf and his band of brigands are based out of. One needs to go through here to reach Downfall.

This town surrounds Bavlorna's cottage and is run by bullywug aristocrats. Leadership of Downfall often goes through violent change as royalty play at intrigue that mimics larger kingdoms.

When a friend, an enemy, or a stranger enters your home, you are expected to be gracious and accommodating to them until such time as they prove, by their words or actions, undeserving of such hospitality.

You must not steal from a friend, an enemy, or a stranger. To take something that doesn’t belong to you without the rightful owner’s permission is a crime and an unforgivable breach of etiquette.

When a friend, an enemy, or a stranger offers you a gift, you are obliged to accept it and offer something of comparable value (be it a gift or a service) in return. Such reciprocation need not happen immediately.