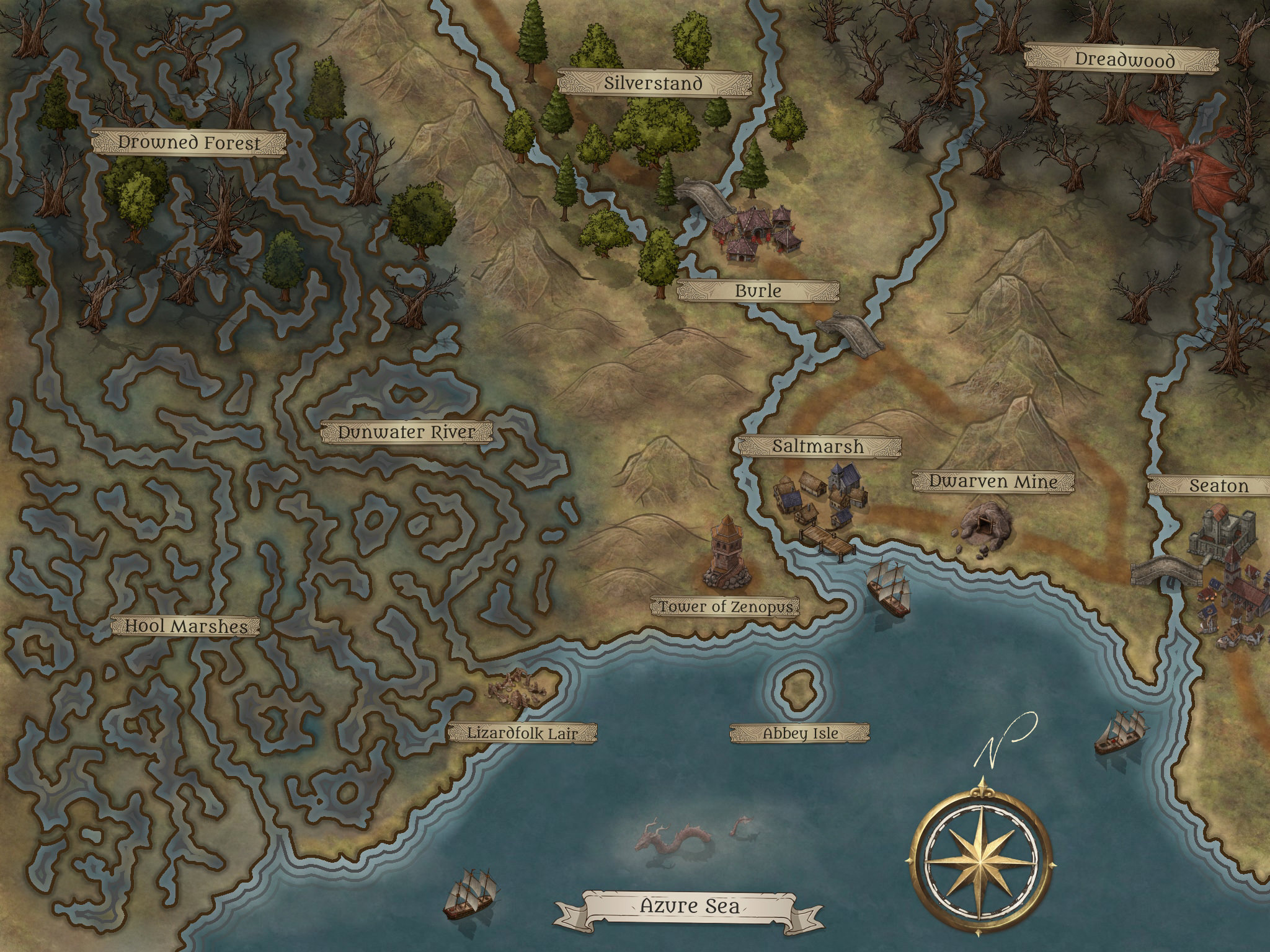 Saltmarsh
Saltmarsh is a nondescript fishing village tucked away on the southern coast of the Kingdom of Keoland. For several generations, Keoland was a formidable military power. Its superior cavalry and bold knights pushed the kingdom’s borders outward to the north, west, and east. Each successful campaign increased both the crown’s wealth and power, and each one in turn drew the kingdom’s attention even farther north. The southern coastal regions of Keoland remained a backwater.

Saltmarsh, remote though it might be from the center of power in Keoland, is entering a new phase of its life as it reacts to the king’s plans. The crown’s agents want to expand the village’s port and make it a prime location for trade with the world beyond. In another recent development, a band of dwarves — bearing a decree from the king himself — have arrived and begun to excavate the hills and seaside cliffs near town, looking for precious metals. If their work bears fruit as expected, the mine stands to become a major factor in the village’s — and, indeed, the entire region’s — prosperity.

Naturally, not all of Saltmarsh’s residents feel the same way about the recent developments in and around their community, which is the key issue that affects their lives and livelihood. Although the recent changes stand to bring new prosperity to the area, many locals don’t want to see their home changed.
Abbey Isle
The island is the site of a small abbey that was long ago abandoned by the order of monks that built it. Since then, various outlaw gangs and monsters have claimed it as a lair.
Burle
Burle is a fortified outpost that is always on guard for monsters emerging from the Dreadwood. It serves as a key stopover point for travelers venturing inland from the southern coastal region. The community is dominated by a small keep set atop a hill that overlooks the forest it borders. A few farms cluster around it, the locals relying on the royal garrison to keep them safe from marauders.
Dwarven Mine
Dwarven prospectors have toiled in this new mine for the past three years. Soldiers from Keoland’s royal army are stationed here for security alongside dwarf fighters from the Copperlocks clan. Travelers in need of shelter can rest on cots in the guard towers that surround the place, but only those with business related to the mine are allowed inside the gates without supervision.
"Haunted" House
This run down manor house was once considered haunted, but our adventurers put those rumors to rest by uncovering a smuggling ring hidden inside. Now it sits empty, a monument to the region's notorious illegal operations.
Lizardfolk Lair
The lizardfolk here view the area around the swamp as their domain. Their labyrinthine lair lies south west of Saltmarsh. Queen Othokent leads this colony and has agreed to ally with Saltmarsh to face the threat of the Sahuagin.
Seaton
The folk of Saltmarsh point to Seaton as an example of the fate they want to avoid. For years, Seaton was about twice as large as Saltmarsh and enjoyed prosperous fishing and shipping industries. When King Kimbertos Skotti turned his attention south to deal with the Sea Princes, his admirals chose Seaton as the location for an important military port. Today, Seaton has been transformed from a robust fishing town into a drab fortress. Seaton’s harbor is heavily fortified, and a large garrison of naval ships, infantry, and cavalry serves as the primary defense point for the region.
Tower of Zenopus
The wizard Zenopus once dwelled in this tower on the cliffs outside Saltmarsh. He built his lair next to the remains of an ancient graveyard rumored to be haunted.
Campaign on D&D Beyond
Campaign on Roll20